The plans below show a public park when it first opened in 1920 and the same park today.

The plans illustrate how grange park has changed since it opened in 1920. Overall the main changes show that an amphitheatre has replaced the musician’s stage, the rose garden is now a central feature, and the pond was replaced by a children’s play area.

Turning to the present day diagram, the fountain that once dominated the centre of the park has been replaced by a rose garden surrounded by a seating area. The musician’s stage was converted into an amphitheatre and the pond is now a children’s play area with a cafe next to it. Additionally, an underground car park has been constructed under the current water feature where the glasshouse once stood.

The plans below show the layout of a university’s sports centre now, and how it will look after redevelopment. 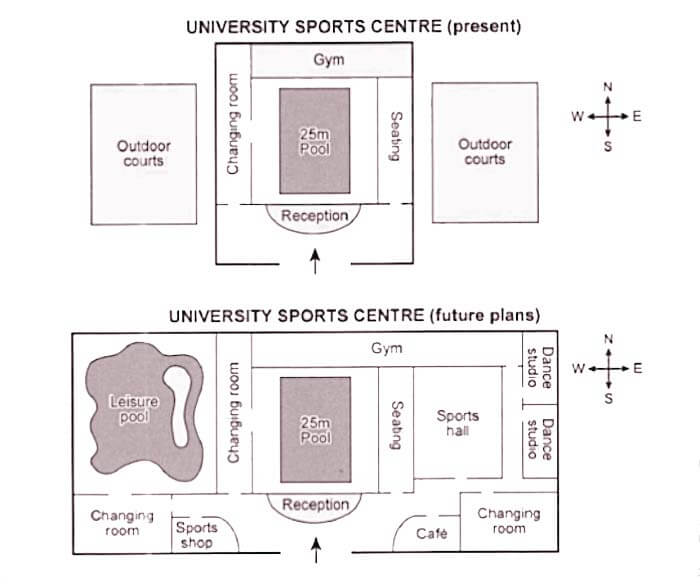 The plans illustrate the current layout of a university sports complex and proposals for its redevelopment. Overall, the university sports centre is expected to become much bigger with new recreational facilities planned such as dance studios, a leisure pool, shops and a sports hall.

At present, behind the reception area, there is a 25-metre indoor pool with a changing room and a seating area on either side, including a gym toward the rear of the building. In addition, there are two separate outdoor courts adjacent to the main building on the east and west side.

Regarding future plans, the outdoor courts are set to be removed and the building is planned to be upgraded to a self-contained sports facility. The current pool is going to remain as it is and a large leisure pool with a changing room is expected to be built in the west wing. A proposed sports centre in the east wing will include dance studios and a changing room. There are also proposals for a sports shop and a cafe in the reception area.