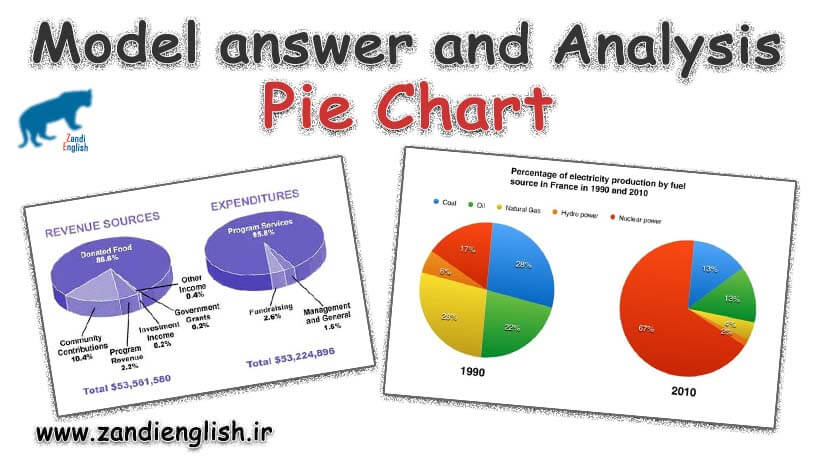 The chart below shows a comparison of different kinds of energy production in France in 1995 and 2005. 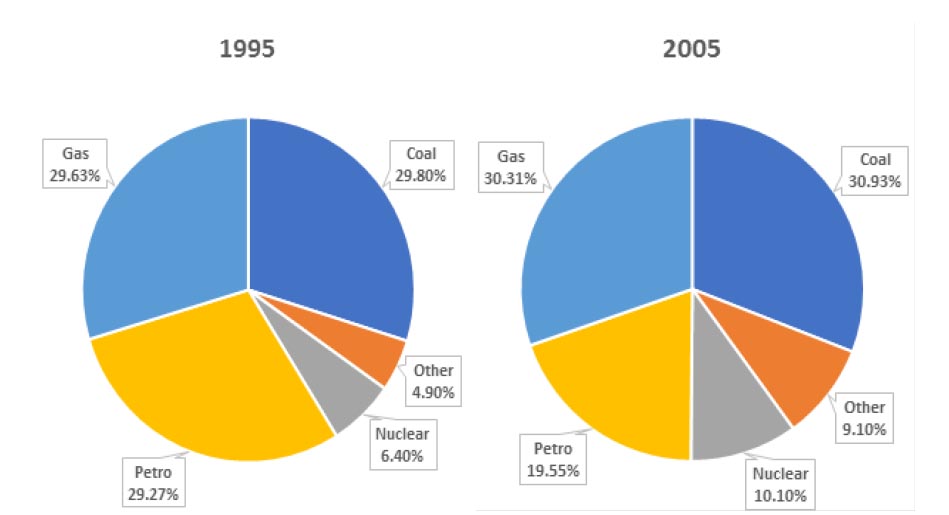 The pie charts illustrate energy generation from five different sources in France in two years 1995 and 2005.

It is clear that while the percentages of energy produced from Coal, Gas, Nuclear and Other sources increased, the reverse was true for Petrol over the period shown. Additionally, Coal and Gas were the two most significant means of energy production in this country during the research period.

In 1995, Coal was the primary source of energy in France with the figure registering nearly 30%, while Gas and Petrol were used to create 29.63% and 29.27% of the total energy respectively. In contrast, only 4.9% of the total energy was manufactured from other sources compared with 6.4% by Nuclear power.

In 2005, the proportions of energy generated from Coal and Gas rose insignificantly to 30.93% and 30.31% respectively. By contrast, much less energy was produced from Petrol as illustrated by a dramatic fall of nearly 10% to only 19.55%. Meanwhile, there were considerable increases in the figures for Nuclear and Other sources to 10.10% and 9.10% respectively.

The charts below show the percentage of electricity consumed by different sectors in Eastern Australia in 2007 and 2010.

The pie charts illustrate electricity consumption in various fields in Eastern Australia in two years 2007 and 2010.

It is clear that the consumption of electricity from those sectors remained unchanged except for Aluminium, Manufacturing and Other metal fields over the period shown. Additionally, the figures for residential and commercial sectors were by far the largest.

The destination of export goods

The pie charts show the destination of export goods in three countries in 2010.

The given pie charts illustrate the percentage breakdown of goods exported from three South American countries, in 2010.

It is clear that while Argentina and Chile’s exports were distributed more evenly among other nations, the large majority of Mexico’s exports were to the USA.

In contrast, the large majority of Mexico’s exports were in the USA, at 82%. The remaining exports from Mexico were to Europe, at 6%, other Latin American countries, at 6%, and other countries, also receiving 6%.

The charts give information about world forest in five different regions.

The pie charts compare five different areas in terms of the proportions of world forest and timber in each region.

It is clear that while forests in Africa make up the largest percentage of total global forest, the opposite is true for Europe. Additionally, North America is the country with the largest amount of timber, while the figure for Africa is by far the lowest.

Regarding the proportions of timber in these areas, North America contains the largest percentage, at 30%, while 23% and 20% of global timber can be found in South America and Europe respectively. Meanwhile, timber in Asia comprises 18% of world timber, which is exactly double that of Africa.

The percentage of people aged 23-65

The charts below show the percentage of people aged 23-65 in different occupations in one UK town (Ashby) and in the UK as a whole in 2008. 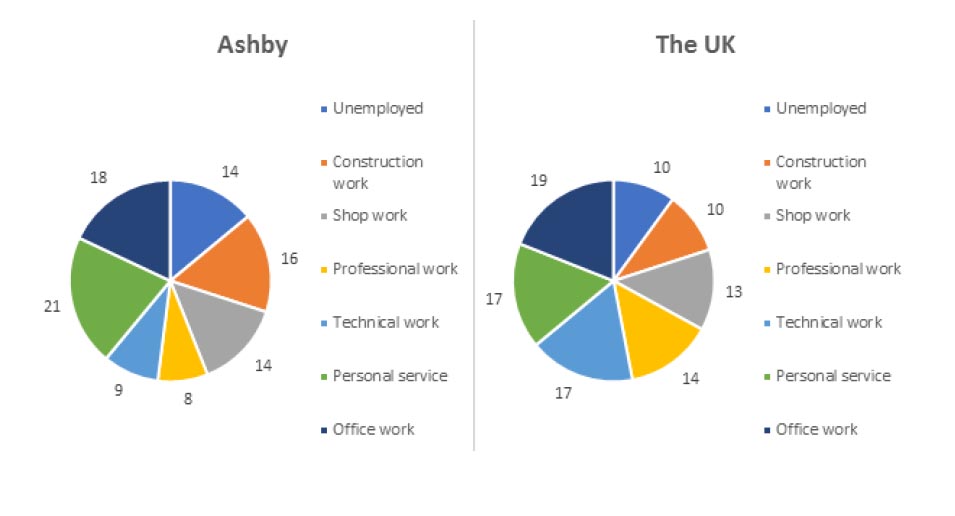 The pie charts illustrate the employment status of people aged 23 to 65, in Ashby and in the UK, in 2008.

Overall, the national unemployment rate was lower than the rate in Ashby. Moreover, while British people generally preferred office work, personal service was the most popular profession in Ashby.

In addition, the UK recorded a relatively high proportion of citizens employed in technical work, at 17%, while the figure for the same type of employment in Ashby was only about half that, at 9%. Furthermore, the percentage of construction workers and personal service providers in Ashby, at 16% and 21%, were both higher than the corresponding figures of the UK, at 10% and 17% respectively. Lastly, with regards to professional occupations, 8% of Ashby residents did this type of work, compared to 14% of the whole population.

The pie charts show the results of a survey conducted by a university on the opinions of full-time and part-time students about its services.

How are you happy with the IT support offered? 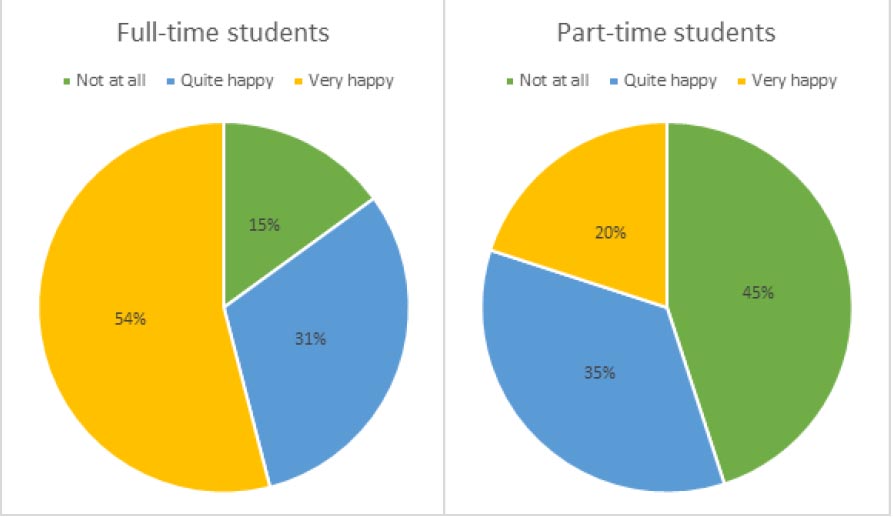 How are you happy with the current opening hours?

The pie charts compare the opinions of full-time and part-time students about their university services, including IT support and opening hours.

Overall, it is clear that there was more positive feedback with regard to the opening hours than IT support. Also, full-time students tended to be more satisfied with the two services than their part-time counterparts.

expenditure of a school

The pie charts compare the expenditure of a school in the UK in three different years over a 20-year period.

It is clear that teachers’ salaries made up the largest proportion of the school’s spending in all three years (1981, 1991 and 2001). By contrast, insurance was the smallest cost in each year.

Expenditure on insurance stood at only 2% of the total in 1981, but reached 8% in 2001. Finally, the percentages for resources and furniture/equipment fluctuated. The figure for resources was highest in 1991, at 20%, and the proportion of spending on furniture and equipment reached its peak in 2001, at 23%. 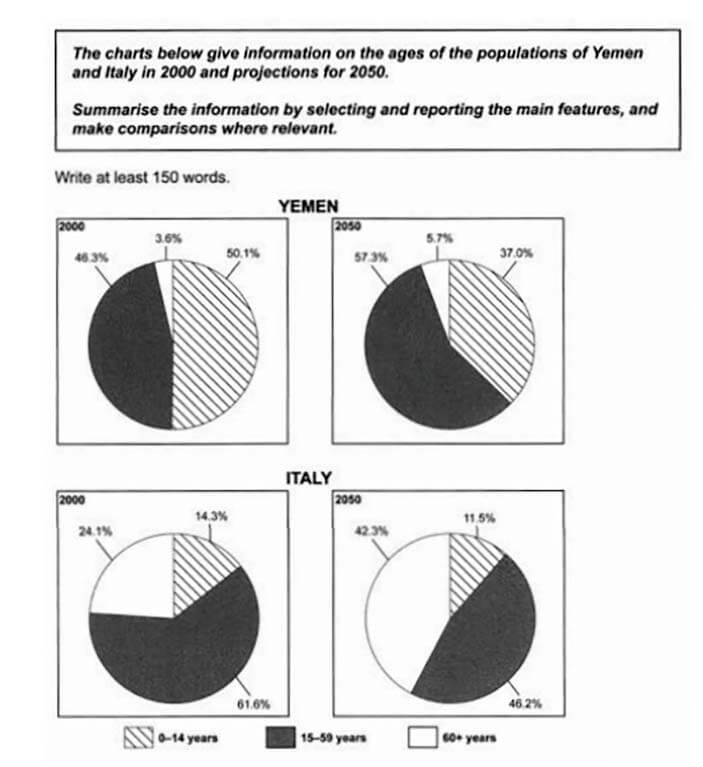 The pie charts compare the proportions of people falling into three distinct age groups in Yemen and Italy in two different years.

It is clear that Italy had the older population in the year 2000, and that the same is predicted for the year 2050. The populations of both countries are expected to age over the fifty-year period.

By 2050, the proportion of children under 15 is predicted to drop in both countries, most noticeably in Yemen where the figure is expected to fall by 13.1%. On the other hand, the figures for elderly people are expected to rise, by 2.1% in Yemen and a massive 18.2% in Italy. Finally, it is anticipated that the 15 to 59 age group will grow by around 10% in Yemen, but shrink by around 15% in Italy. 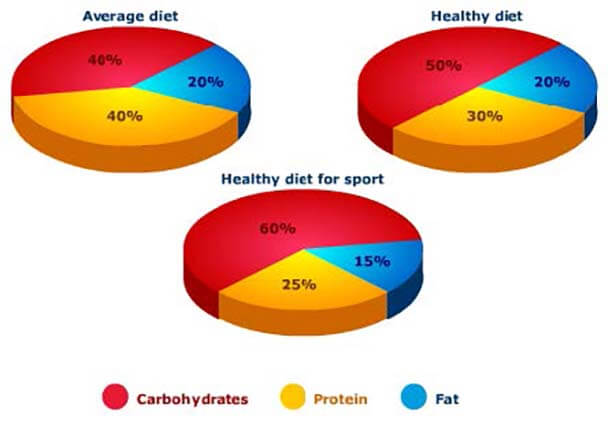 The pie charts compare the proportion of carbohydrates, protein and fat in three different diets, namely an average diet, a healthy diet, and a healthy diet for sport.

The third compound shown in the charts is fat. Fat constitutes exactly o e fifth of both the average diet and the healthy diet, but the figure drops to only 15% for the healthy sports diet.