EFFECTIVE SENTENCE STRUCTURES TO GET AN 8.0+

Connecting sentences together makes your writing more interesting and can help to improve your band score – but you should aim to vary the way you link sentences. Here are a couple of options to try instead of just using “then”:

Again, these variations increase the range of language you use, which can make your writing more interesting and benefit your band score.

When you describe the key information in a diagram, it’s extremely important to include evidence to support your idea. This means you add data: specific numbers, percentages, etc.

Note the way we use prepositions with numbers and dates:

You can use a combination of verb + adverb, or adjective + noun, to avoid repeating the same phrases and to add extra meaning:

Notice that you need a preposition when you use the noun form:

Understand that the grammar never changes, the verbs never change. They stay the same. You are dealing with a limited number of words, a limited number of structures. The only thing that changes is what you are talking about. We might be talking about the purchase of Honda, or we might talk about the number of members at a club or we might talk about the dollars earned or the kilometers traveled or the number of books sold. It doesn’t matter. That is the only thing that changes. It is very mathematical When it comes to task 1, you need to use certain kinds of language:

The language we should use in task 1 writing is the language of comparison and superlative.

We can compare X and Y by using superlatives.

If we have 2-time points (that could be days/weeks/months/years/decades), we need to use trend language. We need to talk about “increase”, “decrease”.

Note: if they give you a diagram with just one year, all we can do is just to compare, we cannot use trend language “increase”, “decrease”, “fluctuated”. In other words, we cannot talk about movement.

On the other hand, if they give you two years, three years, or four years, they still want a comparison, <span”>but now they also want trend language. They also want you to talk about movement. These are really two basic groups of language that you need to use to describe diagrams: comparison and trend language.

Let’s build some vocabulary. Here is a list of verbs, adverbs, adjectives and nouns that you need to use in task 1 writing. 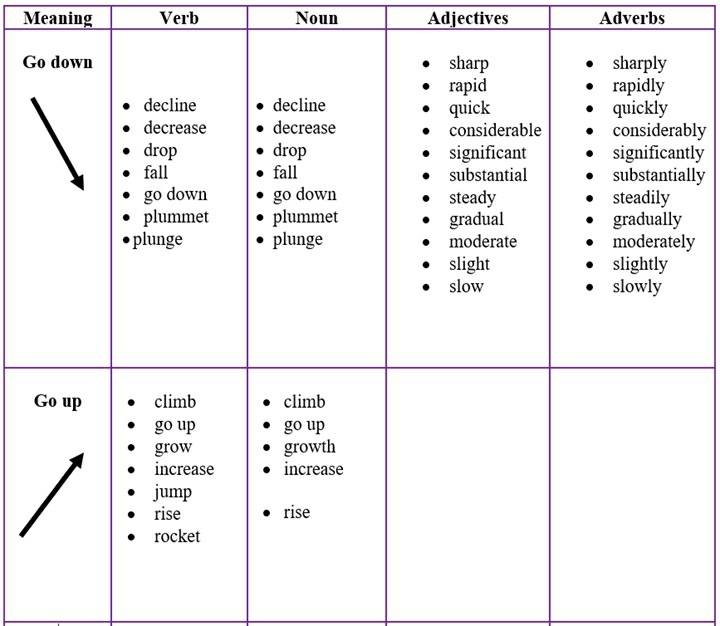 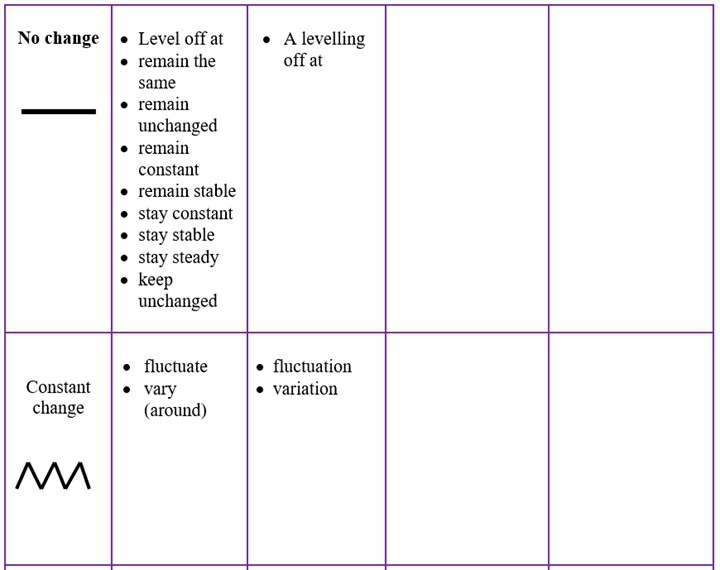 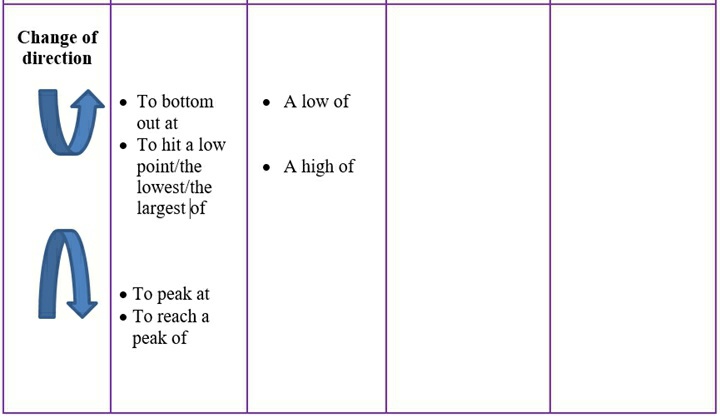 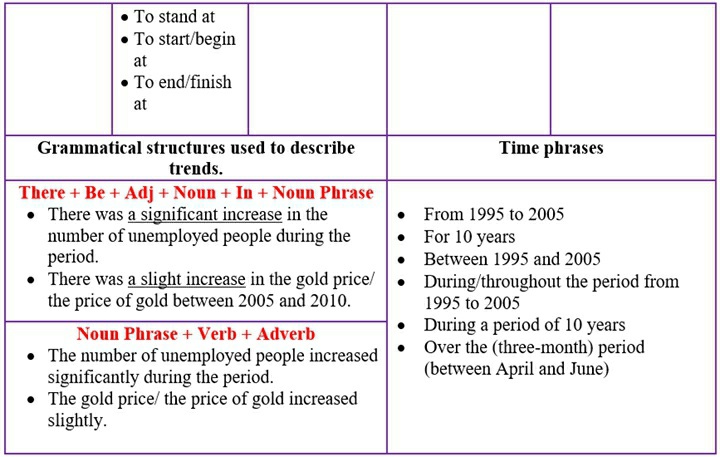 Example:
The overall sale of the company slightly increased by 10% in 2005. 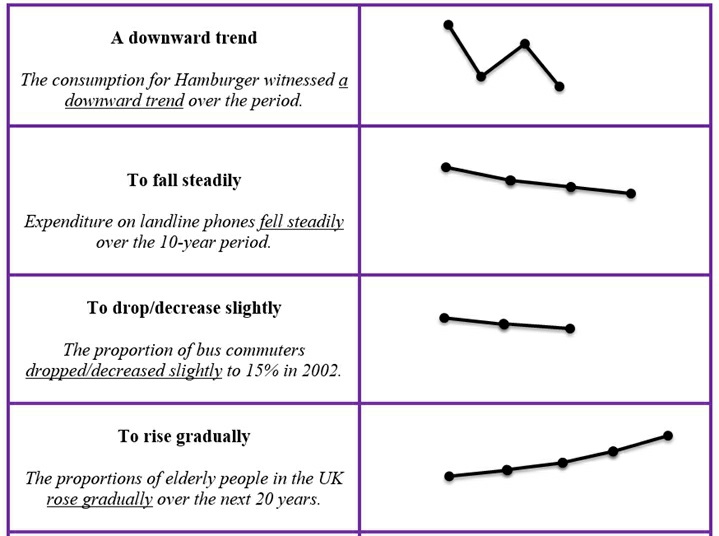 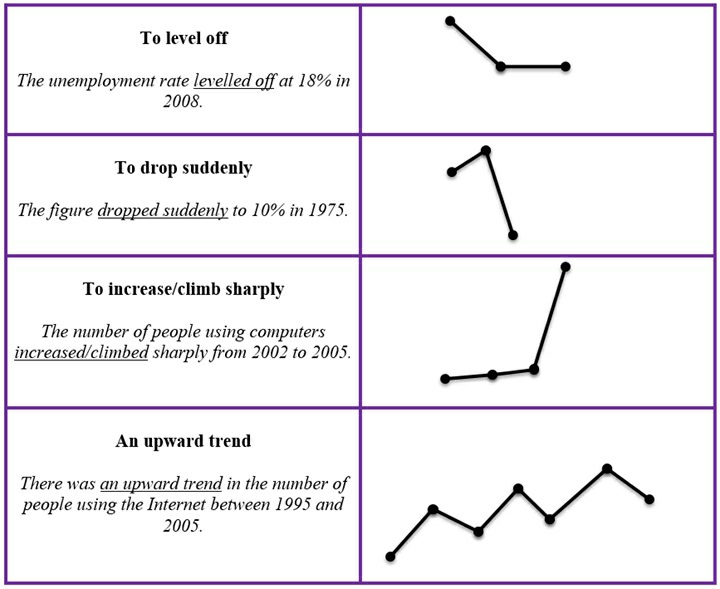 Note that “plunge” and “plummet” do not take adverbs because what they mean is a big decrease.

We can say “decreased considerably/sharply/dramatically/significantly/substantially” or “plunged”, or “plummeted”.

But, we must not say,

No need to use those two verbs “plunge” and “plummet” with an adverb. Decreased sharply equals plummeted. They mean the same thing.

“rocket” does not take adverbs. So to say increased significantly, rose sharply, they mean the same thing as rocketed. A big/sharp increase, so no adverbs for rocketed.

These are flat changes or no changes really, but I want you to be aware that levelled off and stabilized always happen after another trend. You can say, for example

. However, we cannot use “stabilized or levelled off” in this case. Stabilized and levelled off always happen after another trend. For example:

. Don’t ever use stabilized and levelled off to start your description.

“Reach” always happen after a movement. “A high” is always behind a point of the diagram. We shouldn’t say , instead we say started at a high/ began at a high.

“A peak” is always up and down. A peak can be a high but it doesn’t have to For example,

Started at & began at

You can use “started at/ began at” at the beginning.

Ended at & finished at

You can use “ended at/ finished at” at the end.

“Soared” really is the same as “rocketed”.

As far as I know, this method allows you to have a variety while maintaining accuracy and limiting what you need to learn. I don’t need you to learn everything. I just need to learn these things. These are simple structures, because there are no time, and no figure. There are no adjectives or adverbs here. These are very simple. Let’s look at these again:

You don’t need to get creative, this is not poetry. This is a boring technical writing. You need to recognize the verbs, and then you need to recognize the nouns, adverbs and adjectives. Just use what I gave you, learn the simple words here, learn the simple grammar and you will find that you have an incredible range of words and structures just by using the combination of the basics I’ve mentioned above.

So all that you need to know is just some basic things, and you are able to change the words around a little bit and that’s the key. You don’t need <span”>to learn a ton of grammar. You just need to learn this grammar and how to use these words. That’s it, and then you will become a master of IELTS task 1 writing. Now, I would like to warn you that the biggest problem my students have when it comes to task 1 writing is that they don’t believe it’s simple.

When it comes to give you dates and times, and to give you figures, you don’t need to use prepositions. What prepositions do we need? From, in, to, at. So, even the prepositions that you need are very limited, you just need to pay attention and notice what is going to be used in the same structure over and over again. 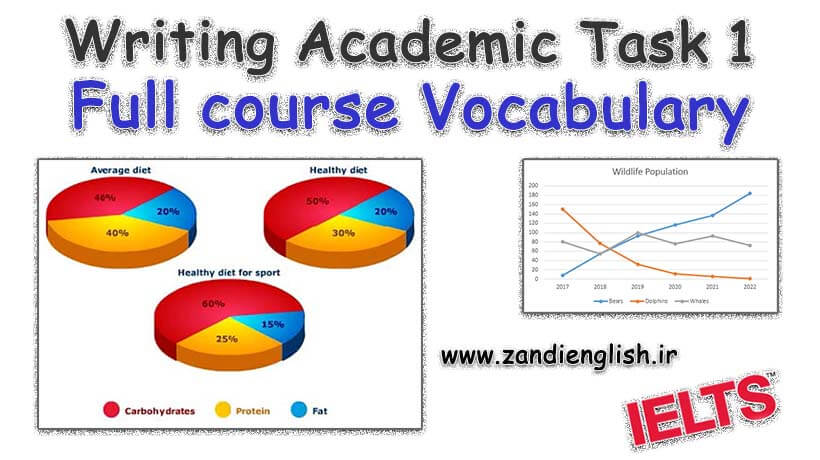