The two maps below show the changes in the town of Denham from 1986 to the present day. 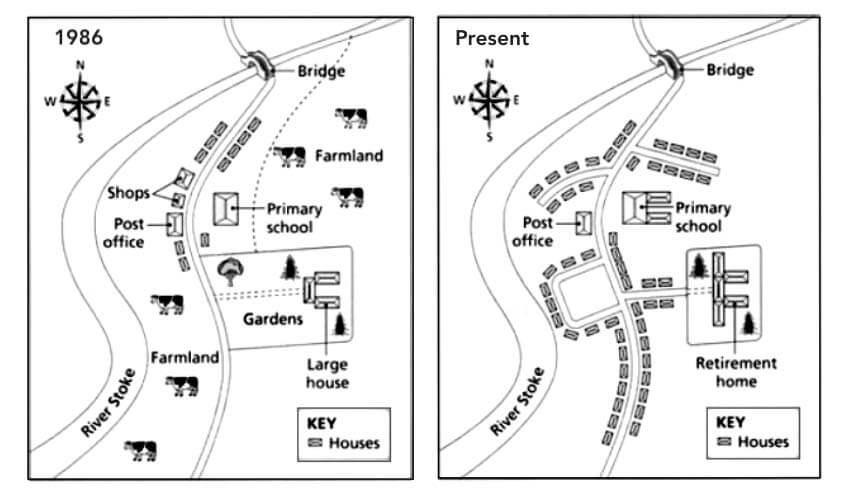 The maps illustrate the main changes which have taken place in the town of Denham from 1986 to the present moment.

Overall, the town has most notably shown an increase in housing development which indicates a higher population and a move away from agriculture and farming.

One change that stands out is that there has been a significant redevelopment over the whole period. To the east of the river stoke housing now dominates the area of what was once farmland. In 1986 there were shops and just a handful of residential properties. Now there are neither shops nor farmland left, although the post office is still there. The bridge over the river stoke still stands as it did in 1986.

Another noticeable change is that more roads have been built around the housing complex. Additionally, the gardens that were in front of the large house in 1986 have been removed and the house has been expanded and converted into a retirement home. The primary school still stands and has been extended in the decades since.

Aim for around 170 to 190 words in this task. You will not have time to go into a long report and you need to be selective in writing task 1.

Here is a tricky-looking task. It consists of 3 maps/diagrams over 3 time periods showing changes that have taken place. Actually, it is easier than it looks as long as you logically group the information.

Planning is important in IELTS writing task 1 just as it is in the essay section writing task 2. Spend about 4 minutes planning a task 1 as you must analyse the task, think of what comparisons you have to make, the language / grammar needed and also decide on a logical structure.

The diagrams below show the changes that have taken place at West Park Secondary School since its construction in 1950. 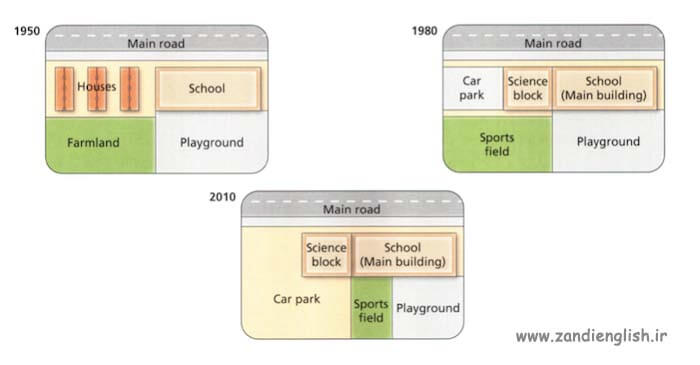 The diagrams illustrate how West Park Secondary School has changed since it was built in 1950.

Overall, the main school building remained unchanged throughout the whole timeframe, while the farmland and houses were removed to make way for a car park, a science block and a sports field in later years.

In 1950, the area around the school consisted of houses in the west and farmland in the south-west. There was also a playground behind the school and a main road in the north. Looking at the Map for 1980, it can be seen that the houses were demolished and a science block and a car park were built there. Another noticeable change is that the farmland was converted into a sports field, while the playground remained unchanged.

By 2010, although the science block remained untouched, it is evident that the sports field was relocated and made smaller. Additionally, the playground was reduced in size to make way for a larger parking facility. The main school building itself and the main road remained the same over the 60 year period.

The introduction just rewords the task question, so start with paraphrasing the task by using synonyms or restructuring the sentences.

Keep this part simple and concise and make sure the paraphrasing contains the same meaning as the original task question. You do not have to paraphrase every single word but do not copy whole sentences.

The overview begins with ‘overall’ and briefly summarises the main features, no detail is given, such as years or key changes. I have only shown the main changes that have taken place.

The body paragraphs cover each map/diagram by year and the key changes. The task uses the past tense as the time periods are in the past.

I have also used the passive voice here such as   ‘it is evident that…’  and  ‘It can be seen that…’  To describe something that has been removed, use the passive such as ‘houses were demolished‘ / ‘The farmland was converted into a sports field’  / ‘the sports field was relocated..’

Keep the word count below 190 words but above 160 words. A very long report (over 200 words) does not give you a higher band score and you will end up running out of time.