How many words for IELTS writing? Rules & Advice

Example Paraphrasing – It is possible for successful athletes to make a lot more money than people working in other important jobs. 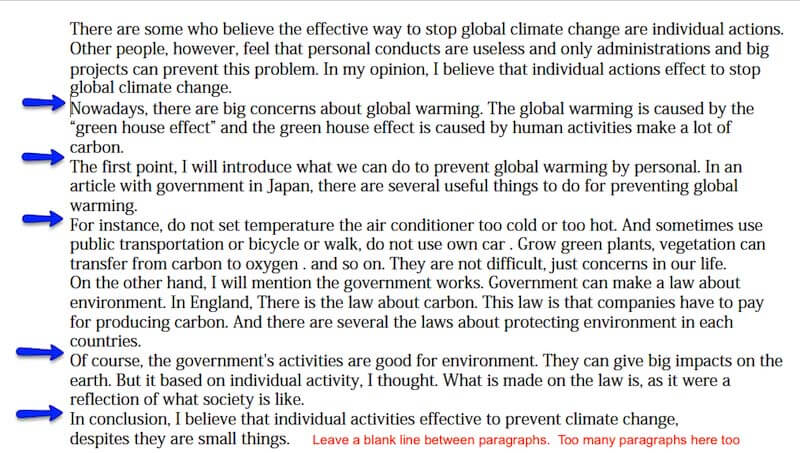 One of the biggest problems in big cities is unemployment, crime, and pollution.

One of the biggest problems in big cities is unemployment, crime, pollution, .

How do you think we can solve the problem of overcrowding in cities?

3. Do not use exclamation points

In my opinion, it’s the best solution to overcrowding in cities!

4. Phrases like “more and more”, “bigger and bigger”, and “greater and greater” are good. However, instead of writing “more and more people are driving cars these days”, you could use trend language in task 1 writing to write this sentence like

That’s much better than “more and more”. In addition, instead of using a structure such as “much more”, you can say

Also, “big” is too informal for reports and essays, we should use

5. Do not begin sentences with “And”, “But”, “Or”. Instead use linking phrases that sound more academic such as:

7. “Most/almost”: “Most” is an adjective (usually) that means the greatest quantity, amount, measure, degree, or a number of something. It is followed by a noun, prepositional phrase, or adjective:

“Almost” is an adverb that means very nearly (a language of estimation), it means close, but NOT totally. Examples:

8. Manage your time well. Task 1= 20 minutes. Task 2=40 minutes. A poorly written essay for the report will receive a higher band score than an incomplete one. Task 1 = 150 words, Task 2 = 250 words. Make sure you write the minimum number of words.

9. Subject-verb agreement: He, she, it….plays, does, receives, negotiates, etc. This is a rule you learned in elementary grammar. You cannot still be making this mistake on the IELTS test. If you make this mistake in your essay, you can forget about getting a good band score.

11. Articles (a, an, the, no article): The last of the three biggest elementary mistakes. Maybe because you have articles in your own language. It’s a foreign concept to you. The other thing is you don’t read them out, and you usually use articles in theories whereas the best way on how to use articles is by looking at a lot of proper accurate writings. Review the rules about articles and apply them to every noun you write.

12. Singular/Plural, Countable/Uncountable: When speaking in general about something, use the plural form. For example: “People use computers in their offices every day. (Don’t say: people use in their every day); or: people need a lot of money for their lives (don’t say: people need a lot of money for their .) When it comes to Countable & Uncountable, it’s a bit challenging here because there aren’t rules about what is countable and what is uncountable. I would say keep a little list of words that are countable and uncountable. I don’t want to see etc. these are common mistakes students make.

it’s very specific. Instead, you should say:

14. Use linking words and transition phrases at the beginning of all body paragraphs, and the conclusion. Keep your sentences short and well-linked. It’s a key if you want to improve your grammar. It will help your grammar and your organization as well. For example:

17. Active tense can be changed to passive tense to omit the pronoun.

19. In the introduction, tell the reader what you’re going to do. For example: “”. No need. The way that I will teach you how to give an introduction is going to be incredibly clear, and incredibly high level. I’m not just teaching you how to write essays for a 5.5 in the exam, I’m teaching you how to write essays that will be good for any university in the world. So, my method is incredibly clear but helps you with your organization. So, instead, you could write a concise thesis statement.

20. Avoid using absolutes such as; all, every, none, only, always, never, completely, and totally. For example: when goes abroad, they suffer from homesickness. Be careful of using 100% and 0% statements.

Review this list. When you’ve done with your first essay, go through the list to make sure you are not making some of these mistakes.